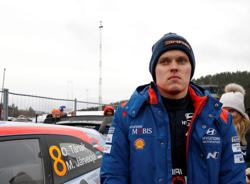 Seven times world champion Ogier won the day's first three stages on slippery asphalt roads in the French Alps near Gap but then lost time with a costly spin and puncture, ending 7.4 seconds off the lead.

"I was pushing in the final stage because I was angry," said Ogier, a seven times Monte Carlo winner who drove the last stage with three winter tyres and one studded.

"Conditions were very difficult with a lot of rain and we had to carry a studded tyre on the car. After a couple of kilometres it was starting to move at the rear."

Evans also had the same unbalanced mixture of tyres on the day's final stage.

"Seb had a fantastic day. He took a lot of risks and maybe I didn’t take quite enough," said Evans.

Hyundai's overnight leader Ott Tanak dropped to third overall, 17.9 seconds behind Ogier, after struggling to see at the end through a misted-up screen.

Toyota's Kalle Rovanpera lay in fourth place after taking the lead briefly in the morning and then incurring a 10 second time penalty. The Finn later lost more time with an excursion into a field.

The rally is being run without spectators due to the COVID-19 pandemic and with Friday's opening stages starting before dawn due to an evening curfew. The race formally finishes in Monaco on Sunday. 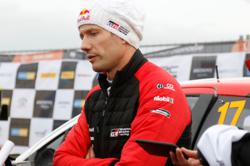