ABU DHABI (Reuters) - Conor McGregor weighed in alongside three of the other top lightweight contenders on Friday ahead of UFC 257 but the name on everyone's lips this week has been Khabib Nurmagomedov, the retired champion in that weight class whose successor has yet to be crowned.

McGregor tipped the scales in Abu Dhabi at 155 pounds for his main event match-up with Dustin Poirier, and Dan Hooker and Michael Chandler also made the lightweight limit for their co-main event.

There is no title up for grabs on Sunday, but the victors from those bouts will likely contest for the belt in their next match, provided Nurmagomedov does not return.

UFC president Dana White has been making no secret of the fact that he would like to see Nurmagomedov, who retired undefeated after beating Justin Gaethje last October, come back for a lucrative rematch with McGregor.

The Dagestani beat the Irishman via submission in 2018 in the main event of the most successful pay-per-view card in the organisation's history.

However, Nurmagomedov's father and coach Abdulmanap passed away in July last year and though the fearsome wrestler took the Gaethje fight, he promised his mother not to enter the octagon again without his father in his corner.

White has said that Nurmagomedov would consider a comeback if any of the four lightweights on Sunday's card can show him something worth getting back in the cage for.

Yet his long-time training partner and friend Daniel Cormier, a former UFC two-weight champion, says it will take a lot for him to return.

"I think for Khabib, it's got to be something competitively. His financial position is so different. I just think it's not going to be money any more," Cormier told reporters at a UFC press event on Thursday.

"(It would take) something competitive that goes 'wow, this makes me want to put everything else aside and prepare for a fight!', because that's what it takes."

McGregor is not giving too much thought to a rematch and is instead focusing on his second meeting with Poirier, whom he beat at featherweight during his meteoric rise.

"I have so many weapons in my arsenal, they are all fine-tuned, I'm in a phenomenal place," McGregor told a news conference on Thursday.

"I look forward to getting out and showcasing them, painting my picture and putting on a beautiful performance for the fans around the world," he added. 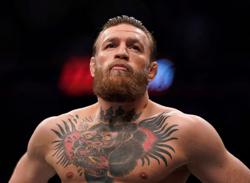