Tokyo Games may be too big a gamble, disease expert says 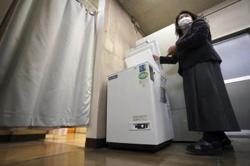 TOKYO (Reuters) - As embattled Tokyo Olympics organisers enter the final six months of preparations for the delayed Games on Saturday, virus experts believe hosting the world's biggest sporting event may be too big a gamble.

The Olympics are due to start on July 23 but with much of Japan in a state of emergency and growing public opposition, organisers are under increasing pressure.

Japan has been less severely hit by the coronavirus pandemic than many other advanced economies, but a recent surge in cases spurred it to close its borders to non-resident foreigners and declare a state of emergency in Tokyo and major cities.

With 15,000 athletes plus support staff expected to descend on Tokyo for the delayed Olympics and Paralympics Games from all over the world, the Games represent a unique challenge for organisers.

"Do you have to risk that? Risk by holding the Olympic Games? I don’t think so," Kentaro Iwata, a prominent infectious diseases expert from Kobe University told Reuters.

"We are facing far more danger than last year, so why do you have to hold the Olympic Games, cancelled last year due to risk of infections, this year?

Organisers have maintained that postponing the Games for another year is not on the table, leaving complete cancellation or striving ahead as the only options.

Health ministry official Kazuho Taguchi on Wednesday echoed comments from Prime Minister Yoshihide Suga that the government is continuing with preparations as planned.

At this point, the plans are not "conditional" on the public or athletes being vaccinated against COVID-19, Taguchi said.

But Iwata, who rose to prominence with videos criticising the quarantine of the Diamond Princess cruise ship in February, doesn't think holding the Games is the solution.

"Is it like the attitude of a bad gambler? The gambler who loses money just pours in (more) money to get it back," he said.

With COVID-19 vaccination rollouts differing country-to-country, whether the Olympics can go ahead "depends on the COVID-19 situation not only in Japan, but also other countries," said Koji Wada, a professor at Tokyo’s International University of Health and Welfare.

Even if the Games go ahead, full-contact sports like judo or wrestling will require more testing and attention to hygiene than other events, said Wada, who advises the government on pandemic response.

The numbers of spectators, athletes and events themselves may have to be curtailed.

"A full-scale Olympics, which we usually have, may not be possible," he said.

Organisers have said a decision on spectators will come in February or March.