Pension scheme plan for athletes who qualify for Olympics 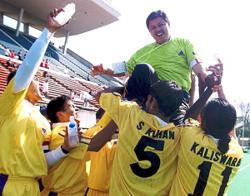 PETALING JAYA: There could soon be an added motivation for our athletes to take part in the Olympics.

The Youth and Sports Ministry are looking at introducing a pension scheme for those who qualify as currently only athletes who have won a medal are eligible.

Youth and Sports Minister Datuk Seri Reezal Merican said in Parliament yesterday that they are in discussion with various sports associations on the matter. He added that it will be brought to the Cabinet once details are finalised.

The current pension scheme for Olympians started during the Athens Olympics in 2004. It was extended to Paralympians during the tenure of former Sports Minister Khairy Jamaluddin but was only for medal winners.

“We would like to thank the minister for considering the OCM’s appeal to introduce a pension scheme for our Olympians.

“The time has come for us to recognise and repay those who have sacrificed years of their life to qualify for the Games.

“When they qualify for the pinnacle of sports and fight for the nation, we all come together regardless of race, religion or creed to cheer them on. They competed on our behalf.

“We rejoiced with them and we despaired with them. Now that they are past their prime and faced difficulties particularly during this pandemic, the move by the government to introduce a pension scheme is timely.

“It is our time to ‘compete’ on their behalf, ” he said, adding that he hopes the proposal will be approve as soon as possible.

To date, a total of 12 athletes have made the cut for the Tokyo Games.

Japan planning to ban overseas spectators over COVID-19 fears: report
Shiffrin says should not have to choose between 'morals' and job to compete at Games
Sailing: Luna Rossa skipper hopes Team New Zealand go for twin-helmsman
Most in Japan 'interested in Olympics' but don't want them to happen -Yomiuri poll
Elliott loses yard sponsor over dead horse photo
Iran's only female Olympic medallist to compete under white flag in Tokyo
Jubilant Johaug powers to 10km freestyle gold
Tokyo 2020 organisers to raise ratio of women on its board to 42%
Tokyo 2020 head to discuss COVID-19 steps with IOC's Bach, others on Wednesday
Elliott barred from racing in Britain pending dead horse investigation