No Village at the next SEA Games

PETALING JAYA: There will be no Games Village for the 31st SEA Games in Hanoi next year.

The South East Asian Games Federation (SEAGF) sport and rules committee meeting, which met online yesterday, decided that the various contingents will be housed at hotels, as was done in Singapore 2015 and Malaysia 2017.

The meeting also discussed the proposed amendment to the SEAGF charter and rules as well as the proposed number of sports for the Games next year.

Host country Vietnam provided a detailed briefing with regard to the 36 sports that they are proposing for the 2021 Games. Vietnam said that some venues would be outside Hanoi but with the farthest distance being 150km.

Several countries, including Malaysia, have also appealed for additional sports to be included.

Among the sports that have been proposed for consideration are indoor hockey, netball, cricket, skateboard, sailing, sambo, bowling, rugby, squash, lawn bowls and E-sports.

The prerogative on the sports to be contested lies with the host country.

A total of 56 sports with 530 gold medals were on offer in the previous edition in the Philippines last year.

The recommendations by the SEAGF sport and rules committee will be tabled to the SEAGF executive committee and SEAGF council today. 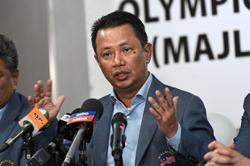 Sports for 2021 SEA Games to be finalised in November

Evans wins in Turkey to take back championship lead