KUALA LUMPUR: The national para track and field athletes are disappointed that the Asean Para Games, scheduled to be held in the Philippines, have been cancelled.

The Games had been postponed three times before they were finally cancelled by the Philippines Paralympic Committee (NPC Philippines) on May 8.

The Games were originally scheduled for January but were postponed to March because the organisers were facing financial woes.

It was then postponed to May but the dates clashed with Hari Raya. The Malaysian Paralympic Council asked for a change of dates.

NPC Philippines postponed it to October but the Games have now been cancelled.

“With the cancellation of the Games, we will not get to feature in a single competition this year,” said sprinter Mohd Afiq Mohd Ali Hanafia, who had wanted to retain his sprints golds in the Games.

“I am not sure whether we will get the chance to compete in any domestic competitions this year due to the virus,” said Afiq, who has featured in Palembang in 2011, Singapore in 2015 and KL in 2017.

“The Games was to be a warm-up for me before my first Paralympic in Tokyo next year,” said Jonathan.

The 29-year-old Jonathan, who won gold in the KL Asean Para Games in 2017, said that he hopes to feature in next year’s Games in Hanoi in December.

“I will be 30 next year and it could be my last year in competitions but it all depends on my body and health.

“Next year will be a busy year for me as I am expected to feature in the World Para Grand Prixs, Paralympics, World Para Championships and also the Asean Para Games,” said Jonathan.
Article type: free
User access status:

Asean Para Games off – for good 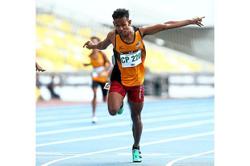 Golden era coming to an end