Gavin, the country’s top-ranked player and its first-ever Asian Tour Order of Merit winner in 2017, was the favourite for the award which comes with a RM10,000 reward.

“I’m very honoured and humbled by this recognition. I’m a true Selangor boy, I played golf at the school level and at the national level under the Selangor banner.

“This award means a lot, not just personally to me, but also to golf as a sport. It shows that we can achieve as much in golf as in any other sport,” said Gavin, who had to miss the award ceremony as he is competing in the European Tour’s Trophee Hassan II in Morocco.

National bowler Siti Safiyah admitted that she’s over the moon after picking up her first sportswoman award.

“I always wanted to win the award. I was nominated with Shalin Zulkifli for best team but we missed out last year,” said Asia’s No. 1 bowler, who also received RM10,000.

“It’s special for me since it’s my first time winning a sportswoman award.

“It’s definitely not an easy win because there are other big-name athletes in contention.”

Swimmers Ng Jing Fu and Angelina Chan picked up the Most Promising Sportsman and Sportswoman award with a premium saving certificate worth RM5,000. 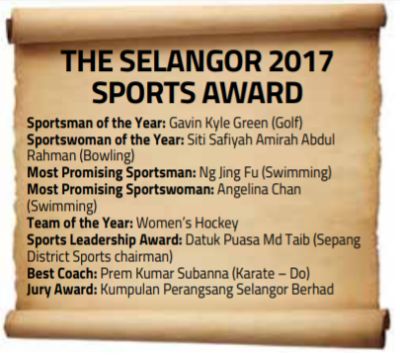