Malaysia’s Khadijah believes she can be an Olympic skiier

The first team members of Ski Malaysia (from left) Jeffrey Webb, Khadijah Mirzan and Othman Mirzan during the unveiling of the Malaysian ski and snowboard association in KL on Monday. - AZMAN GHANI/ The STAR

PETALING JAYA: Youngster Khadijah Mirzan is not daunted by Ski Malaysia’s seven-year plan to have skiiers qualify for the Winter Olympics.

The 19-year-old Khadijah together with brother Othman Mirzan and Jeffrey Webb were named as the first members of the newly-formed national ski team at Wisma OCM on Monday.

The trio have a tough competition plan set for them – they have to earn qualification for the World Championships (in 2017 in St Moritz, Switzerland, and in 2019 in Are, Sweden); the Asian Winter Games (in 2017 in Sapporo, Japan) and the Winter Olympics (in 2018 in Pyeongchang, South Korea, and in 2022 in Beijing, China).

“I think it’s a reasonable target. I feel honoured to represent my country and that it is all becoming a reality,” said Khadijah, who is the granddaughter of former Prime Minister Tun Dr Mahathir Mohamad.

The giant slalom skiier is now studying at Dartmouth College in New Hampshire, the United States. She has since competed in the International Ski Federation (FIS) Eastern Finals in Vermont, the United States, and Eastern Canada FIS Races to hone her skills.

When asked if she could make it to the Olympics, Khadijah replied “I really hope so. With the support shown by everyone, anything is possible. If a Ghanaian (Kwame-Nkrumah-Acheampong) can compete in it (2010 Winter Olympics in Vancouver), I think it’s possible.” 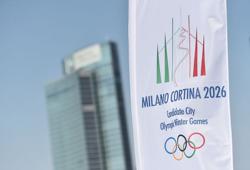