But the 22-year-old was the toast of the team for scoring the first two goals to help the Tigers chalk up a convincing 5-3 win over Nur Insafi in the quarter-final second-leg match at the National Hockey Stadium in Bukit Jalil last Saturday. 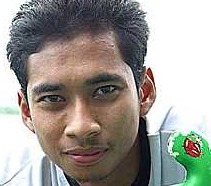 Maybank advanced to the semi-finals on a 6-3 aggregate and they will play against Division One champions Ernst and Young in the semi-finals. The first-leg match will be held at the National Hockey Stadium in Bukit Jalil on Friday and the return match is scheduled for Sunday.

Hafifihafiz did not play the quarter-final first-leg match against Nur Insafi in Penang last Wednesday because he was down with fever.

“I am the only national forward in the team but I scored fewer goals than my team-mates in the MHL Division One matches,” he said.

“For the quarter-final second-leg match, I had just recovered from fever and was under pressure to deliver the goals for Maybank.

“I gave my best and was happy to score two quick goals in the first nine minutes. We went on to win the match and it was a relief for me that I managed to do my part to deliver the goals. And now I want to go all out to help Maybank beat Ernst and Young.”

Hafifihafiz added that victoty over Ernst and Young would be sweet revenge for their defeat by the league champions in the quarter-finals last year and also in the two Division One matches this season.

“We lost to them narrowly in the two league matches — 0-1 in the first round in Seremban and 3-4 in the second round match in Bukit Jalil,” he said.

“Although they have 17 players from the national training squad in their ranks, we hope to turn the tables on them.”

The other semi-final tie is between defending champions Tenaga Nasional and Division One runners-up Sapura. The final is scheduled for Dec 27.