KUALA LUMPUR: Veteran Chairil Anwar has warned his Maybank team-mates that their 1-0 advantage over Nur Insafi after the first-leg of the Malay-sian Hockey League (MHL) quarter-final in Penang on Wednesday is no big deal.

The return-leg will be played at the National Hockey Stadium in Bukit Jalil tomorrow.

The 36-year-old Chairil, who has featured for the Tigers for 17 years, scored the only goal of the match in the 42nd minute, courtesy of a deflection.

The former international said that they could not afford to make the same mistakes in the return-leg against Nur Insafi, who are powered by seven Indians and two Bangladeshis. 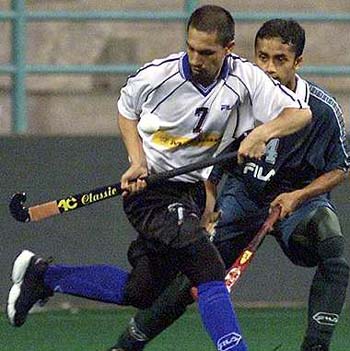 “We beat them 5-2 in the first round match in Division One but in the second round we were over-confident and lost by the same margin,” said Chairil, who retired from international hockey in 2003 after amassing 279 caps.

“We have learned our lesson and will tread with caution in the second-leg.”

Chairil has also warned his team-mates not to continue throwing away good scoring chances on Saturday.

“We muffed at least five penalty corners in the first-leg and were lucky that Nur Insafi also failed to score from the six they had in the match,” he said.

“We have to cut down on the mistakes in defence and go all out for an early lead to put the pressure on them.”

The winners of the Maybank-Nur Insafi tie will face league champions Ernst and Young in the semi-finals.

The first-leg of the semi-finals will be held on Dec 19 and return-leg on Dec 21.