The world number one conceded a walkover to Germany’s Marc Zwiebler in the first round of the Hong Kong Open yesterday and he would make a quick return home. 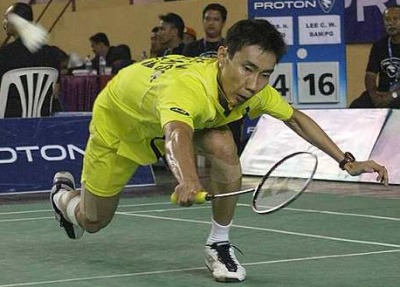 Playing it safe: Chong Wei has pulled out of the Hong Kong Open and the National Grand Prix Finals due to a recurring knee injury.

Chong Wei has also made up his mind to skip the premier local tournament, the National Grand Prix Finals, scheduled for Dec 9-13 in Alor Star. With the decision, he will skip the chance to go one better on the record of six national titles he shares with his coach and mentor, Misbun Sidek.

Chong Wei, who crashed to yet another tame defeat by Olympic gold medallist Lin Dan in the China Open final in Shanghai last Sunday, said that he did not want to risk aggravating the injury.

“I picked it up during the China Open. It is an old injury but it is not serious. My coach and I felt that it was best that I give this Hong Kong Open a miss,” said Chong Wei in a telephone interview.

Chong Wei’s priority now is the Super Series Masters Finals, which will be held in Kota Kinabalu from Dec 18-21.

Despite missing the Hong Kong Open, which is the 12th and final round of the Series this year, Chong Wei is assured of a place in the Finals, which feature the top eight ranked players in the Series standings with a condition that each country can only have two qualifiers. Chong Wei is currently the leader in the standings.

“Our GP Finals are too close to the Masters Finals. I need more time to prepare. I have decided not to play in the GP Finals unless the BAM (Badminton Association of Malaysia) change the championships to a later date,” he said.

Choong Wei said that he would be  wiser in facing Lin Dan after suffering two humiliating defeats to the Chinese superstar, the other being in the final of the Beijing Olympics last August.

“At the Olympics, the pressure got to me. This time, I did not play well. But I have learnt a lot from both defeats. My coach and I will work to come up with better strategy to get the better of Lin Dan,” he said.