SINGAPORE: Unheralded Lam Chih Bing upstaged the big name stars yesterday for a one stroke lead on the first day of a rain-hit Barclays Singapore Open that saw half the field unable to finish their rounds.

Singaporean Chih Bing fired a four-under-par 67 to be one ahead of a bunch of players, including a charging Ernie Els who was on three-under after 14 holes when the big South African was forced off the fairways due to bad light.

Australia’s Marcus Both was in the clubhouse with a 68 while in-form Englishman Oliver Wilson, beaten in a playoff by Sergio Garcia in Shanghai on Sunday, was three under after 12.

Three-time Major winner Padraig Harrington battled the rain and wind to be five adrift of Chih Bing after 18 holes while world number three Phil Mickelson was six behind the leader.

Two-time champion Adam Scott, who only returned to competitive golf at the HSBC Champions last week after an eight week lay-off battling tonsillitis, had a nightmare round and has his work cut out. 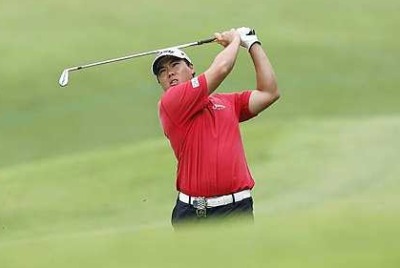 In fine form: Lam Chih Bing of Singapore shoots the ball off the 9th fairway during the first round of the Singapore Open. — AP

The Australian bogeyed his first four holes and added another three for a disappointing 76, stalking past waiting media at the 18th hole refusing to comment.

Persistent rain dogged much of the day from early morning until play was suspended for 130 minutes at 12.05pm.

Chih Bing coped with the weather best on his home course, firing four birdies in his opening nine holes to put him on the right track.

“I guess I played very solidly and hit quite a number of greens and holed some good putts, and I’m very thrilled to be on top of the leader board right now,” he said.

But the 31-year-old is not known as a strong finisher, managing just two top 10s in 105 starts on the Asian Tour. Last week he held a four stroke lead at an ASEAN Tour event after three rounds but blew his chance to win.

“Obviously I want to do well this week. I think, in this position, it’s important not to get ahead of myself and just go out and play three more solid rounds,” he said.

Mickleson, who needs a victory this week to reclaim the world number two ranking that Garcia took from him when he won in Shanghai, was content despite being two over.

“I know two over par doesn’t sound good but I’ll take it,” said the American, who mixed six bogeys with four birdies.

He blamed poor chipping for his woes.

“I need to get out on Friday and get off to a good start with some birdies, but I don’t feel I shot myself out of the tournament by any means.”

Ireland’s Harrington is determined to end his best season ever with a bang rather than a whimper, and knows he can build on his first round score.

“It should have been better, it certainly had the potential to be better but I’m encouraged by the way I hit it,” he said.

“I definitely left a few shots out there and that needs to be better over the next few days.

“I just have to stay patient on Friday and hope a few putts drop. I’d be very happy if I played the same for the next three days because at some stage I’ll start holing some putts and making a few things happen.”

Among other names playing, Ireland’s Darren Clarke struck a 73, as did Thailand’s Prayad Marksaeng, who finished joint eighth alongside Mickelson in Shanghai.

Asia’s current number one, China’s Liang Wen-chong, laboured his way to a 74. — AFP