Actor Ro Bin goes back to his roots with exposure camp

KUALA LUMPUR: Former top wushu exponent Ho Ro Bin has gone into acting since he retired from the national squad three years ago and his first action movie, Cinta 1881, is set to be released soon.

But Ro Bin has not forgotten his roots. The 34-year-old from Penang has joined forces with several former national squad members to organise a wushu exposure camp. 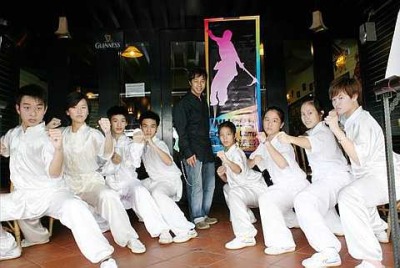 Imparting his knowledge: Ho Ro Bin (centre) posing with his students yesterday. He will beorganising a camp at the Rakan Muda Sports Complex in Puchong next month.

The camp will be held at the Rakan Muda Sports Complex in Puchong and will involve two stages.

The programme is for the participants to focus on understanding and learning the basics of wushu.

Participants will be given an opportunity to perform during the closing ceremony and supervisors comprising volunteers will be on full-time duty to look after their needs.

Each student will be given a souvenir bag, courtesy of Milo, upon registration.

The camp for the juniors cost RM200 each, including accommodation, while the fee for the seniors is RM280 each.

“The camp for the juniors will be restricted to 100 persons and we are limiting the seniors to about 130 persons,” he said.

“The camp will not just be solely on wushu. There will also be fun activities such as creative games, friendly matches and seminars on healthcare and nutrition.

“They will also get to learn about sports science and each child will have the opportunity to practise the basic skills of wushu that they have been working to attain.

“Response has been good thus far. We have also received non-Chinese applicants and this is a good sign as we want to promote the sport to all Malaysians.”

Ro Bin added that staging camps was something that he had wanted to do to help promote the sport.

“It is a healthy pastime and a parent need not spend a lot of money,” he said.

After his retirement from comopetitions, Ro Bin had a short stint as a coach and was in charge of the Malaysian team who won four gold medals at the 2006 World Youth Championships in Kuala Lumpur.