Iraqis train in Baghdad for first time since fall of Saddam

BAGHDAD: The Iraqi national football team were seen training in Baghdad on Tuesday for the first time since the overthrow of Saddam Hussein five years ago.

Around 20 players resumed training this week at Al-Shaab Stadium, the main football venue in Baghdad, under Brazilian coach Jorvan Vieira, who returned earlier this month after guiding Iraq to Asian Cup victory in 2007.

Football crazy Iraqis revelled in the rare display of national unity celebrating the moment with tambourines and trumpets despite a mortar attack near the stadium at half-time. 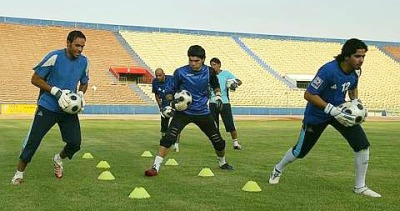 Good to be back: Members of the Iraqi national team training at the Shaab Stadium in Baghdad onSaturday. — AFP

A roadside bombing in central Baghdad that killed one person and wounded three did little to dampen the enthusiasm of the crowd or the players, who braved temperatures of more than 40˚C for the practice session.

“I’m back here where I am at home, to form a new team that represent Iraq in the coming international competitions,” Vieira told AFP.

Vieira had created a sensation in Iraq after the war-ravaged country’s Asian Cup success in beating Saudi Arabia, a three-time winners of the competition. He had left after that victory.

The decision to hire Vieira again came after Iraq failed to qualify for the 2010 World Cup Finals in South Africa following a 1-0 defeat to Qatar.

Vieira, reportedly paid US$600,000, was succeeded by Egil Olsen but the Norwegian was sacked after only three matches for refusing to coach in Iraq, reportedly because of his busy schedule.

The team’s next coach was Iraqi Adnan Hamad who was let go in June after the Qatar game.

Amid the violence that followed the US-led invasion of 2003, the Iraqi team abandoned training at home for security reasons, basing themselves instead in neighbouring Jordan or Dubai.

However, the improved security of the past year has allowed them to return to Baghdad, where dozens of fans watched the national team go through their paces under their foreign coach.

“It gives us courage to come and train here in Baghdad with a foreign coach,” said goalkeeper Noor Sabri.

“It is very nice and interesting to train in this stadium in front of our fans.”

That fixture was the first big attendance game in the capital in five years and saw Arbil win 1-0. - AFP