KUALA LUMPUR: Olympians Bryan Nickson Lomas and Elizabeth Jimie headline an eight-member Malaysian squad for the World Junior Diving Championships, which begins in Aachen, Germany, on Tuesday. But they have a tough act to live up to.

Malaysia have produced world champions in the two previous championships. Bryan made history as the first Malaysian champion, winning the boy’s 3m springboard in B category (14-15 years-old) in Brazil in 2004. 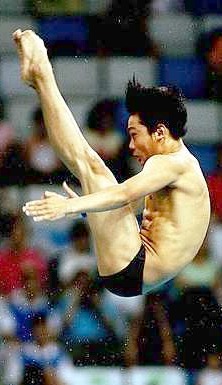 Star performer: Bryan Nickson Lomas is the most experienced diver in the Malaysian team for the World Junior Championships.

Elizabeth continued the golden trail, winning the girls’ 1m springboard in B category when Malaysia hosted the championships two years ago.

Bryan competed in Group A (16-18) at the last championships and won a bronze.

Elizabeth, who made her Olympic debut in Beijing last month, moves up to Group A this time and joining her in the girls’ 1m and 3m springboard events is Gracie Junita, who took part in the 2004 Athens Olympics. And SEA Games gold medallist Cheong Jun Hoong will compete in the girls’ 10m platform event.

But it is in the B category that Malaysian divers have the better shots at finishing among the medallists.

Pandelela Rinong, the youngest female diver in the Beijing Olympics, has been given the nod to compete.

The 15-year-old Pandelela will compete in both the springboard and platform together with Wendy Ng.

Ahmad Amsyar, who won the national schools (MSSM) Best Sportsboy Award after winning the Asian Junior Championships, will compete in the boy’s 1m and 3m springboard together with Pardika Indoma.

Also making their debuts in the championships are Ooi Tzer Liang and Mohd Fakhrul.

Although Bryan is the most experienced diver in the team, Amateur Swimming Union of Malaysia (Asum) secretary Edwin Chong is not looking at a medal from him.

“He has not increased his level of difficulty and just one mistake was enough to kill his chances as what we saw in the Olympics. Bryan has a slim chance in the company of Chinese, American, Russian and British divers,” he said.

“Elizabeth also will find it difficult in a much tougher Group A competition. ”