RIO DE JANEIRO: Brazil forward Robinho has owned up to daubing graffiti on the wall of the team’s dressing room after Sunday’s 3-0 win away to Chile in a World Cup qualifier.

Newspaper pictures showed the words, “There must be respect for the best team in the world,” written in Spanish on the walls of the National Stadium.

Robinho told reporters it was a response to the Chilean players, who he said underestimated Brazil before the game.

“I was the one who wrote it,” he said. “Chile should have respected Brazil for our tradition, which I don’t need to talk about. They thought it would be easy.” 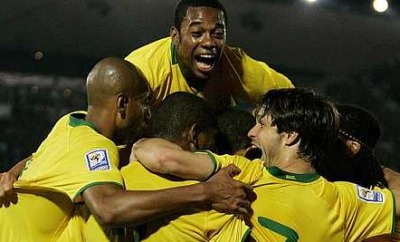 Top of the crop: Robinho (top) celebrating with team-mates after Brazil’s 3-0 win overChile in Santiago on Sunday. — AP

“We didn’t ask for anything more than respect.”

“Maybe if they had played more defensively, they would have made it more difficult for us. But they tried to play us on equal terms and you saw the result.”

Brazil had failed to score in their previous three matches before the Chile game and lost to Venezuela in a friendly and Paraguay in a World Cup qualifier in the process.

The forward, who this month joined Premier League club Manchester City for a British record £32.5mil (US$57.21mil), said he hoped beleaguered Brazil coach Dunga would keep the job he was in danger of losing before Sunday’s win.

“He’s our coach, our commander and we hope he stays until the World Cupm” said Robinho. “The pressure here is great and the only way to relieve it is with victories.”