Croatian high jumper Blanka Vlasic missed out on a share of the jackpot after finishing second behind German Ariane Friedrich, but ahead of Olympic champion and home favourite Tia Hellebaut who surprisingly finished third.

The 18-year-old Jelimo won the 800m in 1:55.16, more than three seconds ahead of compatriot Janeth Jepkosgei and third-placed Kenia Sinclair of Jamaica. 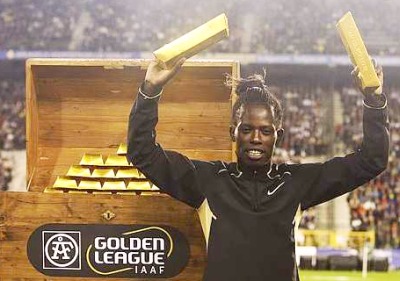 Earlier, Bolt powered past fellow Jamaican Powell in the 100m to set a new course record time of 9.77.

Powell, who ran the joint second-fastest 100m of all time in Lausanne on Tuesday, finished in 9.83 after leading for most of the race until Bolt ran past him in the final 10m.

“I am used to chasing him,” Bolt told reporters after a contest Powell described as “one of the most exciting ever. I was very excited about this race and knew it would be close”.

Nesta Carter made it a Jamaican clean sweep by coming third in 10.07. 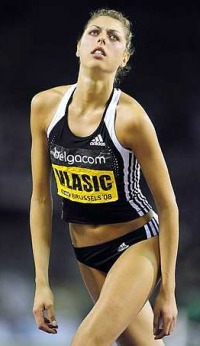 Blanka Vlasic was a picture of disappointment after finishing second in the high jump. - AFP

There was further heartbreak for Vlasic – pipped to the gold by Hellebaut at the Beijing Games – when she failed on her final jump at 2.02m.

Friedrich and Hellebaut also failed to clear that height but the German won on the countback in one of the biggest shocks of the night having got over 1.97m on her first jump while Vlasic needed two attempts and Hellebaut three.

In the women's 100m, Belgium's European champion Kim Gevaert marked her last ever appearance on home soil when she scorched to victory in 11.25.

Amid the loudest roar of the night from the 50,000 capacity crowd, Debbie Ferguson of the Bahamas finished second and American Me'Lisa Barber was third behind the tearful 30 year-old Gevaert, who will retire at the end of the year.

Elsewhere, Russia's Olympic champion Yelena Isinbayeva won the pole vault with an unimpressive jump of 4.72m, blaming a combination of tiredness and the damp weather.

American Jeremy Wariner overcame the wet and windy conditions to hold off Britain's Martyn Rooney to win the 400m in 44.44.