BEIJING: Jamaica head into the Beijing Olympics with a team boasting a wealth and depth of sprinting ability of which most countries can only dream.

A staggering 41 sprinters are included in the West Indian island’s 52-strong track and field team and they are well placed to enjoy their best-ever medal haul at an Olympic Games.

Jamaican athletes have claimed a total of 44 Olympic medals, with all but one won in athletics, and the large majority of those in the individual and relay sprint events. 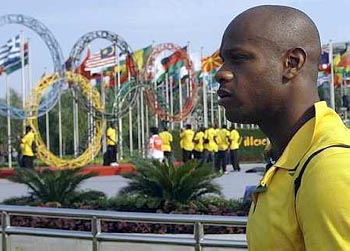 In deep thoughts: Jamaica sprinter Asafa Powell looks on at the end of the flag raising ceremony at theOlympic Village in Beijing Tuesday. – AP

In the 2000 Olympics in Sydney, Jamaica gleaned two gold medals to match their achievement in the 1948 Helsinki Games, Veronica Campbell-Brown winning the women’s 200m before going to help claim the 4x100m relay crown. There was also a silver and two bronze medals in the haul.

But the outlook seems much better this time around.

The men’s team, now without reserve sprinter Julien Dunkley after he tested positive for the banned drug boldenone, include current 100m world record holder Usain Bolt and the sprinter whose time he beat for the milestone, Asafa Powell.

Bolt will arrive in the Chinese capital with a sprint double rightfully at the forefront of his thoughts – the 200m is his preferred event and is somewhat lacking the high-octane competition of the shorter sprint.

Also included in the roster are experienced sprinters Michael Frater and Christopher Williams, who will doubtless help give reigning world champions the United States a run for their money in the 4x100m relay.

Arguably, however, it is the women’s team who are stronger.

At the Jamaican national trials, where places for the Beijing Games were decided, defending Olympic 200m champion and reigning world 100m title-holder Campbell-Brown could only finish fourth in the 100m.

The trio ahead of her, Kerron Stewart, the little-known Shelly-Ann Fraser and Sherone Simpson, finished at 10.87 seconds or quicker and will all push for podium places if they can maintain similar world-leading times.

“We have four girls running 10.8 seconds,” said Stewart, who will double up after finishing second in the 200m trials behind Campbell-Brown’s season best of 21.94 seconds. “The times speak for themselves.”

“Our chances with Shelly-Ann are very good,” added Stewart.

And the future looks equally bright, according to Professor Errol Morrison, president of the island’s University of Technology (UTech), who has been carrying out research into what makes Jamaican sprinters tick.

In a study carried out by the University of Glasgow and the University of the West Indies on more than 200 Jamaican athletes, 70% were found to possess the Actinen component which vastly improves fast-twitch muscle fibres.

Those rapidly contracting fibres are the ones that enable athletes to sprint fast, and the research on Jamaican athletes contrasts against a 30% response for Actinen from a group of Australian athletes.

“What it says to us is what is happening is not a flash in the pan, but there will be many potential Asafa Powells, Sherone Simpsons and Sherikas (Williams) because the genetic predisposition is there,” Morrison said, quoted by the Kingston-based Gleaner newspaper.

Of the 200 athletes tested, Morrison said some had come from UTech and others from the prestigious Stephen Francis-headed MVP track club, who include the likes of Powell and Campbell-Brown among their members.

“It is quite clear that there are a lot of people with this potential to be good performers who, by nurturing the environment for them, the nutrition, training, focusing the whole psychological competitiveness, we can remain at the forefront for many years to come,” said Morrison.

“The question is always there. What is it, nature or nurture that makes us so good?

“The answer seems to be coming that there seems to be a strong underlying genetic or nature predisposition as to why we are able to perform like this.” – AFP