BEIJING: I have never laughed so much in my life. It was so over the top, pure Hollywood.

Eighty-four pianists in white tie and tails launched into Gershwin's “Rhapsody in Blue” on 84 pianos. A jet-propelled “Rocket Man” soared into the stadium to whoops from the crowd.

The opening ceremony at Los Angeles in 1984 was unalloyed showbiz. In the next five Games, organisers preferred a less flamboyant palette of nationalistic fervour, folklore and historical pageants. 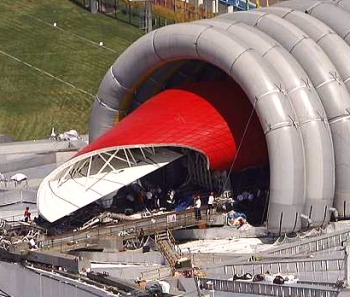 Secretive: Workers standing under a covered structure on the roof of the NationalStadium or ‘Bird’s Nest’ in Beijing on Saturday. The structure’s purpose is unknown butspeculation is that it may be the cauldron for the Olympic flame or props for the openingceremony on Friday. – AP

Californian flower girls handed out bouquets in LA because, as the oleaginous TV commentator explained, they wanted to “ensure this is a person to person moment”.

I have, for my sins, covered every opening ceremony since then and there has been a great deal of all the above. They seem to get longer every time but I have become an unashamed addict.

Admittedly, spectators are often force-fed a diet of anodyne bonhomie but the showstopping moments stay in the mind forever.

At the Seoul Summer Games, the South Korean crowd went crazy when 76-year-old Sohn Kee-chung, winner of the 1936 marathon, carried the torch into the stadium.

He had been forced to enter that marathon using a Japanese name because Korea was then occupied by Japan.

But cynics may recall Seoul as the year of the burnt doves.

Several of the birds – traditional symbols of peace – met an untimely end while sitting on the edge of the Olympic cauldron for the lighting of the flame.

The flame-lighting is the climax of the show and organisers work long and hard in secrecy searching for the wow factor.

In Barcelona in 1992, Paralympic archer Antonio Rebollo lit the Olympic flame by firing a blazing arrow into the cauldron.

But the gold medal for pure emotion would have to go to Atlanta in 1996.

Ali, ravaged by Parkinson's Syndrome and a pale shadow of the boxing genius who once could “float like a butterfly and sting like a bee,” shuffled up to kindle the flame, his hands shaking and his face gripped in concentration.

President Bill Clinton's eyes were glistening with tears. It certainly had me sobbing.

To cries of “G'Day” to the world, Sydney went for an army of lawnmowers and a giant pink jellyfish. A lone horseman led a cavalry charge of 120 stockmen in a flamboyant opening flourish.

Then, in a gesture of national reconciliation, Aborigine runner Cathy Freeman was picked to light the flame, creating a ring of fire in the heart of a cascading waterfall.

But she and the 110,000-strong crowd held their breath as the eight-tonne steel bowl of flame shuddered and snagged at the start of its journey up the side of Stadium Australia.

Engineers fixed the fault in just three minutes that must have felt like a lifetime for the organisers.

After all the doomsday warnings about Athens not being ready in time, the Greek capital launched the 2004 Olympics in its ancient birthplace with an acclaimed spectacular.

The stadium floor was flooded with water, creating a shimmering sea that burst into flames as the five Olympic rings were set ablaze by a pyrotechnic comet flashing down from the sky. It looked superb.

And then, as in every Summer Games, the opening ceremony almost ground to a halt to welcome the people who really matter – even if at times it seemed every athlete on earth was parading through the stadium.

Then come the obligatory pyrotechnics. Fireworks always look more spectacular live than they do on television.

Heading for my seventh and final Olympics, I must say I cannot wait to see what the Chinese will come up with. – Reuters