PETALING JAYA: National number one Ong Beng Hee is disappointed that the general manager of the Squash Racquets Association of Malaysia (SRAM) is not in favour of extending the tenure of Pakistan coach Jamshed Gul.

World number 11 Beng Hee said that Jamshed, whose contract ends on Thursday, has helped him a lot in winning the Kuala Lumpur Open in March and the Malaysian Open title on Saturday. 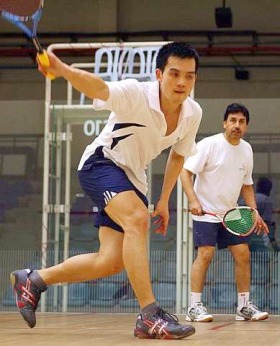 “He is a good coach and I really appreciate his guidance in helping me win my third Malaysian Open title,” said Beng Hee

“However, SRAM general manager (Peter Chee) and other officials are not too keen to extend Jamshed's contract.

“I don’t know why they are against him as he has a good track record in coaching,” added the 28-year-old Beng Hee

“It will be sad if his contract is not extended as he has helped not only me but also other national players like Nafzahizam Adnan and Mohd Asyraf Azan improve their game and rankings.”

Jamshed, a former professional, who was ranked top 10 in the world in late 80’s, was first hired by the National Sports Council (NSC) a decade ago to prepare national players for the 1998 Kuala Lumpur Commonwealth Games

However, he left in 2003 but was re-hired again in 2006 and since then has helped the national back-up players to improve their rankings.

Jamshed, who left for home yesterday, said that he loves to work in Malaysia and would be really happy if his contract is extended.