BAGHDAD: A glimmer of hope that Iraqi athletes could be reinstated for the Beijing Olympics after their nation was banned from the August Games did little to cheer Iraq’s seven-member squad on Friday.

Dejected Iraqi athletes reeled with disappointment even as the International Olympic Committee (IOC) said there was a slim chance that they may yet be able to compete in the Olympics. 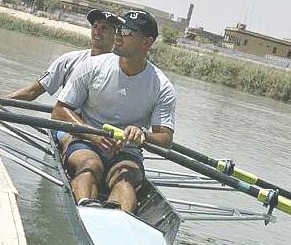 “There is a slight hope that remains,” an IOC spokeswoman in Geneva told AFP on condition of anonymity. “The dateline for athletes is open until the end of July. Provided that the Iraqi government stops interfering, the suspension on the Iraqi Olympic Committee could be lifted.”

But the comments brought little cheer to the athletes.

“There is a small hope, but we are not expecting much,” Hamzah Hussein, 32, one of two Iraqi Olympic rowers who had hoped to be heading to China, told AFP in Baghdad.

“I was so depressed after I got the news that we would be deprived from participating in the Olympic Games in Beijing.

“It seems that we are paying the price for the current conflict in the Iraqi sport scene,” said the lean and muscular athlete.

“I had been training continuously with my friend for more than 70 days to be ready for this great and universal event,” said Nozad.

“Suddenly, we find ourselves outside the walls of the Olympics, it is a painful and sad decision.”

The IOC in a letter dated July 23 confirmed the prohibition of seven Iraqi Olympic athletes after first imposing the ban on the war-ravaged country’s sporting officials for political interference last month.

“In spite of all the joint efforts of IOC and OCA (Olympic Council of Asia), over the last months to find a positive solution with the Iraqi government authorities, we regretfully inform you that the decision of the IOC executive board dated June 4, 2008 to suspend the National Olympic Committee of Iraq is confirmed,” said the letter.

In a separate statement issued on Thursday the IOC said they were “disappointed they have been so ill-served by their own government’s actions,” and that the deadline to register athletes had expired.

The IOC added that the Iraqi government had previously invited Iraq to come to their headquarters in Lausanne, Switzerland, to discuss solutions, but Iraq had failed to respond “positively”.

After the initial suspension last month it was believed that up to seven Iraqi athletes would still participate in the Games beginning on Aug 8, including two rowers, a discus thrower, a sprinter, an archer, a judoka and a weightlifter.