Squash: Malaysian Open matches to be played in new glass court from the q-finals

PETALING JAYA: Matches from the quarter-final stage of the CIMB Malaysian Open squash championships will be played in a brand new glass-sided court at the Curve in Mutiara Damansara here next week.

This is made possible by Pizza Hut Malaysia, who sponsored the purchase of the RM700,000 mobile court from Germany for the Squash Racquets Association of Malaysia (SRAM) to further promote the sport in the country.

The sponsorship was a relief to the SRAM because the court that they acquired more than 10 years ago was close to the end of its life span.

The qualifying rounds of the championships (July 21-22) and the first round (July 23) will be played at the National Squash Centre in Bukit Jalil. 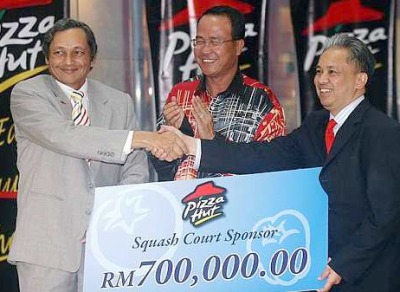 The quarter-finals at the Curve will be played on July 24 and the finals are scheduled for July 26.

Jamaludin Mohd Ali, the managing director of QSR Brands, who are the operators of Pizza Hut, said that squash was enjoying popularity among Malaysians and they were pleased to sponsor the purchase of the new court.

“The new highly mobile court will help the SRAM to easily stage high level squash championships at major malls all round the country, bringing the game to the general public,'' said Jamaludin at the handing over ceremony of the new court to SRAM president Datuk A. Sani Karim yesterday.

Jamaludin added that they were happy to note that Malaysia had top world class players in Nicol David as the women's number one and Ong Beng Hee and Mohd Azlan Iskandar as the 11th and 13th ranked players in the men's category.

Sani said that the support from Pizza Hut would further help them in their efforts to make Malaysia a powerhouse in world squash.

Nicol will be gunning to win her home Open for the fourth consecutive time.

Azlan is the men's defending champion while Beng Hee will be out to emerge as the champion for the third time.