Skipper racing to be fit for Asia Cup

KUALA LUMPUR: Skipper Ahmad Kazamirul Nasruddin (pic) is racing against time to recover from a knee injury to feature in the Junior Asia Cup, which will be held in Hyderabad from July 11-18.

The 20-year-old Pahang defender picked up a knee injury in the national juniors’ recent tour of Europe involving nine matches in Poland and Belgium. He managed to play in four matches and emerged as the top scorer of the team with five penalty corner goals.

“There is still pain in the knee and another knock may just end my hopes of playing in the tournament,” said Ahmad. 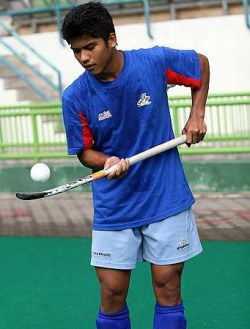 “Carrying the injury is not going to make it easy for me to marshal the backline and shoulder the burden of having to deliver goals from penalty corners.”

The other penalty corner flickers in the team are Mohd Nor Hafiq Abdul Ghaffar and Faizal Saari.

Hafiq was the top scorer in Division Two of the Malaysian Junior Hockey League (MJHL). He scored 25 goals for MSJ-Batu Pahat.

There are 27 players in the training squad and the final 18 will be named tomorrow.

Malaysia will open their campaign in Group A against Singapore on July 11 and their other matches are against India (July 13) and Japan (July 14). In Group B are Pakistan, Bangladesh, Oman and South Korea.

The tournament is also a qualifying event for the Junior World Cup next year. But how Malaysia finish will have no bearing on their qualification. Malaysia are automatic qualifiers as joints hosts of the Finals with Singapore.