Friedrich gets the plaudits and a seat on the bench 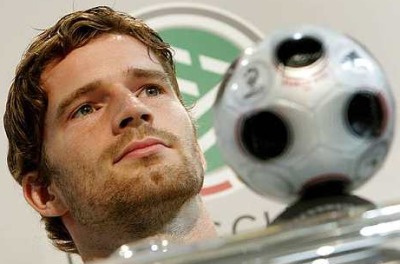 TENERO (Switzerland): Arne Friedrich (pic) has been at the centre of so much praise that he must be asking himself why is he then sitting on Germany’s bench at the European Championship.

The 29-year-old Hertha Berlin defender and captain has played 57 games for Germany and was a starter at the World Cup two years ago, but Loew used a back four of Philipp Lahm, Christoph Metzelder, Per Mertesacker and Marcell Jansen in Germany’s 2-0 win over Poland on Sunday.

Coach Joachim Loew has highly praised Friedrich’s commitment and versatility, and he was one of the players that Loew had in mind when he spoke of some reserves “pushing vehemently” in practice for a place in the starting team.

But Friedrich doesn’t figure he will be coming off the bench any time soon.

“I’m in good shape and good form, but I don’t assume I’ll start. The coach did everything right in the match against Poland,” Friedrich said yesterday, one day before Germany’s match against Croatia that may decide the winner of Group B.

Friedrich can play as a central defender or at right-back. Jansen was the weakest link in the German defence, at left-back. If Loew replaced him, he would have to move Lahm – one of Germany’s best players and who would rather not switch from right-back – and insert Friedrich in his place.

Loew does not appear about to do that.

“The coach had a private talk with me and he explained to me why I wasn’t playing,” Friedrich said. “I want to keep these reasons between him and me, but he did tell me that he sees me more in a central defence role.

“There are still some games left, I’ll see what happens. The coach knows that he doesn’t have to keep me in a good mood.”

Friedrich has worked with a personal trainer on psychological issues over the past season and said he was “physically and mentally” ready to play.

Friedrich, who gained some attention before the World Cup by co-authoring a cookbook with well-known German chef Ralf Zacherl, has one year left on his contract with Hertha. He said he would see that deal through before considering a move to a club playing in the Champions League. – AP