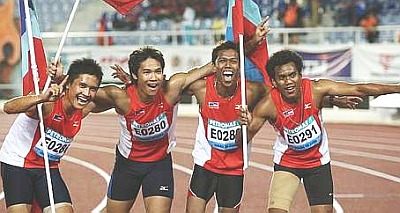 Team spirit: The Sabah men’s quartet celebrating after winning the 4x100m final in a new Games record of 41.04 at the Gong BadakSports Complex yesterday.

Yesterday’s record-breaking feat more than makes up for the disappointment Jironi suffered when he lost in his pet event – the 800m – a day earlier.

“Losing the 800m a day earlier was really disappointing. Today (yesterday), I was determined to get it right,” said Jironi.

“I stayed close on the heels of Vadivellan and made my move towards the end.”

Pahang’s Ganthimanthi again proved that she is the country’s best female middle distance runner when she set a blistering pace to win the 1,500m in 4:45.57.

Ganthimanthi, who also won the 800m on Thursday, improved on the previous record of 4:47.32 set by Vally Michael of Malacca in 2004.

Sabah also made heads turn when they bagged a double in the 4x100m events, with their women’s team posting 47.84 and the men clocking 41.04.

Earlier, Firdaus, Song Hwa and Sin Hui not only had to battle against gutsy opponents but also the scorching heat en route to winning their respective events.

The heat was unbearable and several women track runners even collapsed during the semi-finals of the 4x400m relay.

Firdaus, however, managed to keep his cool to leap to a distance of 15.75m in his sixth and last attempt to break the 10-year-old Games mark of 15.56m set by Chai Song Lip of Selangor.

Firdaus has been without a coach since the Korat SEA Games in December, said: “It has been a challenging time for me without a coach. Hopefully, I can get back my coach (Russian Victor Sutnikov), who has been put in charge of athletes in Johor.

“With proper coaching, I hope to make it to the next Olympics.”

Pahang’s Song Hwa lived up to expectations when she hurled the hammer to a distance of 50.69m to erase compatriot Siti Shahida Abdullah’s mark of 48.78m set in Sabah in 2002.

The 22-year-old re-wrote her own Games record with a 44.98m effort in her fourth attempt to win the gold for the third consecutive time.

Sin Hui has broken the Games record en route to winning the gold medal in every Sukma since 2004.