KUALA LUMPUR: The Badminton Association of Malaysia (BAM) have taken a big gamble in naming a youngster as the reserve for the Thomas Cup Finals, which will be held in Jakarta from May 11-18 in Jakarta. 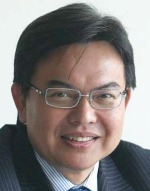 Yesterday, BAM president Datuk Nadzmi Mohd Salleh (pic) said the move to select 19-year-old Mohd Arif Abdul Latif as the fourth singles “was for the betterment of the future of Malaysian badminton”.

“He is a very promising player. He has the approval of all the coaches because of his consistency and ability to withstand pressure,” said Nadzmi after chairing a two-hour coaching and training committee meeting yesterday.

“We compared him with several other candidates and he stood out.”

Nadzmi is aware that Arif, being inexperienced, could buckle under pressure.

It was evident at the last Finals in Japan when Kuan Beng Hong had to step up following Wong Choong Hann’s withdrawal due to an Achilles tendon rupture. A nervous Beng Hong faltered and Malaysia crashed out 2-3 to Denmark in the semi-finals.

“Yes, there will always be a risk. But we will not know what Arif is capable of unless we give him a chance,” said Nadzmi.

On Malaysia’s chances in the Thomas Cup Finals, Nadzmi said: “It is as important to us as the Olympic Games. It is a prestigious world team event and I want our players to do well. The coaches have set a semi-final target. But I hope they will go all the way and win it.”

For the Uber Cup Finals, the only surprise was the omission of Anita Raj Kaur, who has under-performed of late.

If they can get a good draw, Malaysia have a good chance of making it to the semi-finals for the very first time after crashing out in the quarter-finals at the 2004 Finals in Jakarta.