KUALA LUMPUR: Having moved to a higher category, national diver Bryan Nickson conceded that it would be hard to pull off a repeat win in the 16th World Junior Diving Championships, which will be held in Kuala Lumpur from Aug 23-27.

Bryan created history when he became the first Malaysian diver to clinch gold at the last world junior meet in Brazil two years ago.

The Sarawakian took gold in the 3m springboard event of the Group B age-group category (13-14).

At 16, Bryan will now have to compete in Group A (15-16). He has since been groomed for the 10m platform competition and believes that it will be stiffer this time.

More than 30 countries, including powerhouse China, will be competing in the meet in KL.

“When I won in Brazil, there was no Chinese diver in my category. This time, China will have their full squad for the Group A competition,” said Bryan, who returned with the national team from a month-long training stint in Kunming last week.

“Some of their divers are being groomed for the 2012 (London) Olympics. I will have to train harder and have to produce consistent dives to do well this time.”

After winning his first individual gold medal in the SEA Games – in 10m platform event – in Manila last December, Bryan went on to win silver in the 10m platform synchronized event with James Sandayud in the Melbourne Commonwealth Games in March.

Bryan is targeting to reach the top eight final in the individual 10m platform event in the World Juniors.

“I am still learning some new dives. That is why getting a medal will be tougher this time,” he said.

The individual 10m platform is the only confirmed event for Bryan because a new partner will have to be sorted out for him for the synchronized competition.

Of the seven divers in the national squad, only Bryan, Khairul Mansur and Cheong Jun Hoong are still eligible to take part in World Juniors. Khairul and Jun Hoong are both 16-years-old.

The squad will return to China at the end of the month to resume their training for the World Cup to be held in China from July.

The Amateur Swimming Union of Malaysia president, Datuk Seri Shahidan Kassim, said that it would be the second time Malaysia would be hosting the World Juniors after the meet in Penang in 1997. 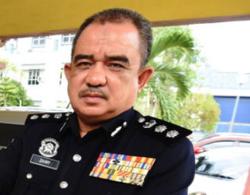