KUALA LUMPUR: Datuk Wira Mazlan Ahmad clocked out for the last time yesterday, ending an eventful 34 years as an administrator that saw him moving up from an officer to director general of the National Sports Council (NSC).

Mazlan, who celebrated his 56th birthday yesterday, was the NSC's deputy director general for 10 years from 1983-1993 and headed the Council for the last 12 years.

The National Sports Institute (NSI) director, Dr Ramlan Aziz, is now the acting director general and he is strongly tipped to succeed Mazlan.

“I am retiring today after working for the government for 34 years, six month and 16 days. I am relieved,” said Mazlan at a press conference in Bukit Jalil.

“The NSC are always reflected by the performances of the athletes. We are always scrutinized and I always feared reading the newspapers in the morning. I did not want them (news on sports) to spoil my day.

“But I have enjoyed every moment of it (the ups and downs of Malaysian sport). I have done my best to improve the image of the sport in the country.”

Mazlan has all the reason to feel proud. Malaysian sport certainly took an upward trend under his tenure.

Better results were produced and more athletes participated in the SEA Games, Asian Games, Commonwealth Games and the Olympic Games.

Under his leadership, the national sports associations also received more money to run their programmes and the welfare of athletes was better taken care of.

The most notable success was the formation of the Jaya '98 programme that resulted in Malaysia winning 10 gold medals in the 1998 Kuala Lumpur Commonwealth Games – the best-ever haul in the series.

“I want to thank all the officials at the state and national level for successfully carrying out their programmes, especially the Jaya '98,” said Mazlan.

“The rise of the Malaysian sport started with this programme.

In 1993, we brought in foreign coaches, increased the budget for national associations and improved on the facilities, especially for gymnastics, shooting, diving and weightlifting.

“These led to success in the (1998) Commonwealth Games. It also injected the much-needed confidence in national associations and athletes.

“This was very crucial and I will always cherish the success of the Jaya '98 programme.”

However, Mazlan has regrets too – the lack of training centres with basic facilities at the district level.

“It was my dream to see a centre with a coach and basic facilities in every 'kampung'. We cannot produce champions if we do not even have basic training facilities for athletes at the grassroots level,” he said.

Mazlan was also saddened by the heavy criticisms hurled at the NSC for the national athletes' failure to win a medal at the 2004 Athens Olympics last year.

He felt that Athens was a success, considering the participation of Malaysian athletes in different sports apart from badminton.

On his hope for Malaysian sport, Mazlan said that it was important to focus on Olympic sports.

“There is a need to raise the expectation of the athletes, especially in the Olympics, Asian and Commonwealth Games,” he said.

“The target should always be winning more than 10 gold medals at the Asian and Commonwealth Games.

“Some of the Olympic sports have now been given priority and this is the right strategy if we hope to see a Malaysian Olympic gold medallist.”

On his future, Mazlan said: “I have been working for a long, long time. Let me take a rest first.

“Maybe, I will be interested to be an advisor but all that will have to wait for now.” 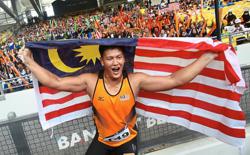