PETALING JAYA: Malaysia may not have a single shooter at the Athens Olympics in August.

None of the national shooters have qualified on merit for the Olympics and there are no more qualifying tournaments.

“We have 45 shooters who are eligible for the one wild card,” NSAM executive secretary Jasni Shaari. “The ISSF will make a decision in June whether to give us (Malaysia) one wild card entry for Athens.

“However, the one wild card is not confirmed. It all depends on whether there are any places available,” said Jasni.

Twenty-two national shooters, 13 men and nine women, took part in the Asian Championships at Subang Shooting Range in February, which was the last qualifying meet for the Olympics. None managed to qualify on merit.

London-based Bernard Yeoh was the only Malaysian to qualify for a final – in the men's individual trap event in the Asian meet.

He made it to the final by finishing second in the qualifying rounds with a personal best of 120 points.

He had needed to finish fifth among the six shooters in the final to make the cut for the Olympics. He finished sixth.

At the 2000 Sydney Olympics, Irina Maharani, the former Russian shooter, represented Malaysia in the Games. The Ukraine-born pistol shooter qualified on merit.

Meanwhile, national shooters will be competing in the President Ally T. H Ong Trophy championships at the Subang Shooting Range from today.

Manchester Commonwealth Games silver medallist Bibiana Ng, a police officer in Sentul, said that with her busy schedule at work, it would be tough for her to do well in the four-day meet.

“I was only given time off for training over the last two weeks and it will be tough for me to go for my personal best. I will be more than happy to win medals in the air and sport pistol events,” said the 27-year-old Sarawak lass.

She added that she would face a strong challenge from Irina, who is expected to win both events.

“I also can expect a tough fight from the Sukma (Malaysian Games) athletes, who will be competing in the championships as part of their preparation for the Sukma in Negri Sembilan next month,” said Bibiana.

The SportExcel-NSC-Milo junior championships will also be held simultaneously with the Ally T. H. Ong Trophy meet at the same venue. 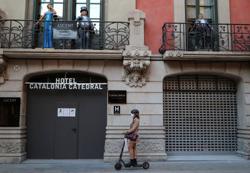