Wang Chen hopes for leniency from IOC on Olympic berth

BIRMINGHAM: Hong Kong's Wang Chen (pic) is seeded to reach the semi-finals of the All-England Open and she is one of the few women's singles players capable of halting the Chinese.

But it may not be enough for her to earn an Olympic place.

Wang looks certain to be in the top handful at the Games' qualifying cut-off date on April 30. But a new rule may destroy her Athens dream.

The International Olympic Committee (IOC) have been tightening up their eligibility requirements for the Games and Wang, who used to represent China, is in danger of falling foul of them.

The former world number one has been playing for her adopted country for several years and her proof of citizenship has been her Hong Kong ID card.

But Olympic regulations require her to have a passport for the country players wish to represent.

The aim of this requirement has been to stop national associations paying for high quality players from other countries to represent them, sometimes with little other loyalty to their new identity than the money.

The deputy secretary-general of the Hong Kong sports federation and Olympic committee, Ronnie Wong, was reported as saying by the South China Morning Post: “We have many different nationalities who have made Hong Kong their home.

“I hope the IOC can be flexible or we will be badly affected.”

Ronnie considers Wang Chen to be a genuine resident of the former British colony, which is now a part of China.

The tougher IOC regulations are also a problem for Pi Hongyang, the China-born world number seven who now represents France.

Hongyang has applied for a French passport and her application is apparently still waiting on a ministry desk, waiting for scrutiny. Unless she hears within the next two months, her Olympic dream will be shattered.

However, Germany's China-born Xu Huaiwen, should be competing in the Olympics. The world number 13 has been given a German passport and looks certain to qualify for Athens.

Meanwhile Dai Yun, who came within one point of winning the world title in Copenhagen five years ago, had to play in the qualifying tournament to get into the main draw of the All-England.

The Chinese left-hander, who now resides in Denmark, has been away from competition for too long to have a ranking and therfore had to battle it out among the minnows. – AFP 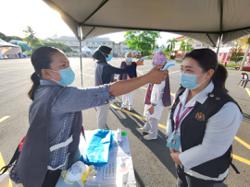