SCOTTSDALE (Arizona): Jonathan Kaye produced an error-free back nine to win the US$4 million Scottsdale Phoenix Open by two strokes from Chris DiMarco on Sunday.

With a closing four-under-par 67, Phoenix resident Kaye finished 18-under on 266 to claim the first prize of US$936,000 and win his second PGA Tour title.

Steve Flesch (66) and Vijay Singh (66) tied for third on 269. The world number two from Fiji has now finished in the top 10 in 11 consecutive PGA Tour events, three short of Jack Nicklaus's record.

Phil Mickelson (72), who at one stage was in a three-way tie for the lead with Kaye and DiMarco (69), faded badly by bogeying four of the last five holes. He finished joint seventh with Scott Verplank on 272.

“This one feels a little better than the first one (last year's Buick Classic),” Kaye, 33, told reporters. “It's kind of hard to believe but it's just nice being in front of friends and family and getting to share it with them.

“I was fortunate enough to get some of the bounces this week that made a difference. I'm just ecstatic to be on top.”

Kaye said he tried to maintain an even keel throughout the round.

“I try to keep things pretty mellow as far as putting pressure on myself. I hit all the shots that I needed to today.

“Chris played awesome and just had one bad shot on 16 and kind of opened the door for me.”

The tournament developed into a three-way contest between Kaye, DiMarco and Mickelson. But after all three birdied the par-five 13th and were tied on 15-under, first Mickelson and then DiMarco fell away.

Mickelson's fall was swift while DiMarco's demise came at the par-three 16th, in front of thousands of raucous fans.

Kaye, also hitting a nine-iron, followed with a safe shot to the front of the green and went in front for good when he parred and DiMarco bogeyed.

DiMarco, who started the back nine with six birdies in a row, then dropped another stroke at the 17th.

Despite having a two-shot lead with one hole remaining, Kaye said he was not comfortable until he made his par at the last.

“I was still worried about Chris holing his (birdie) putt and me potentially three putting,” he said.

“I was pretty focused and trying not to get too far ahead of myself. But it was a good feeling, goosebumps on top of goosebumps.” – Reuters 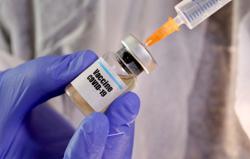