LONDON: Former Football League chairman Keith Harris is considering making a bid for English champions Manchester United, though any deal is likely to be some months away, a source close to the talks said on Saturday.

The source said Harris has held talks with a private equity firm on the issue this week but the discussions were still at a very preliminary stage and any bid was unlikely to come this year.

“This (bid) is something that you need to do in the close season and the process is nowhere near ready yet. It is at the very early stages,” the source said.

Harris, who heads UK investment bank Seymour Pierce, resigned from the Football League in August 2002 after failing in a court bid to recover sums lost from the collapse of pay-TV channel ITV Digital last year.

Earlier, The Daily Telegraph said Harris, a lifelong United supporter, was considering a bid in the region of 160p a share before the stock rallied in recent weeks on takeover speculation.

His interest in the English Premier League champions, who sold England captain David Beckham to Real Madrid last month in a deal worth up to 35mil euros (US$40mil), comes amid speculation that JP McManus and John Magnier, the Irish horseracing tycoons, were preparing to offload their 10% stake in the club.

The speculation helped send United's shares down 3/4p to 145p on Friday, valuing the group at £380mil. 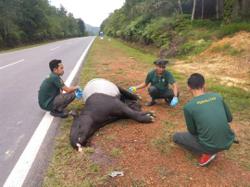