LONDON (Reuters) - The Extreme E electric off-road series launched an initiative on Monday to increase diversity in motorsport by creating opportunities for those from under-represented groups.

The Racing for All initiative draws on the findings of a commission set up and funded by Britain's seven-times Formula One world champion Lewis Hamilton, who also has a team in Extreme E.

Extreme E teams have only five mechanics or engineers each to limit numbers on site in environmentally-sensitive areas but will be allowed a sixth for someone to gain practical experience.

The positions will be aimed at those with less than a year's professional motorsport experience and from female, minority ethnic, or lower socio-economic backgrounds.

"We know from the findings of The Hamilton Commission that our industry is a tough place to break into, particularly for those from underrepresented backgrounds," said Hamilton in a statement.

"When I first discussed the idea of creating a programme with (series founder) Alejandro (Agag) and the Extreme E team, we all agreed that it had to be something which led to real change, and I believe Racing for All does just that."

The series, with identical SUVs and male and female drivers in every lineup, aims to raise awareness about climate change and promote sustainability by racing in remote and damaged environments. 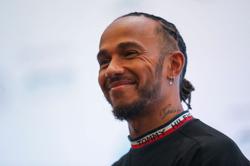