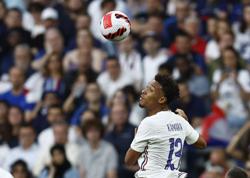 LONDON (Reuters) - Lovers of rumbling V8 engines and American stock cars will be in for a treat at next year's 24 Hours of Le Mans, when NASCAR is set to join the French endurance race in marking two big anniversaries.

Le Mans celebrates its 100th birthday in 2023 while the U.S.-based NASCAR organisation turns 75.

The announced plans are for a modified NASCAR Next Gen Chevrolet Camaro ZL1, run by Hendrick Motorsports with Goodyear tyres, to take the "Garage 56" entry at Le Mans for innovative cars outside the main grid.

NASCAR's last appearance at the Sarthe circuit in northwest France was in 1976 with a Dodge Charger and a Ford Torino brought over by late founder Bill France Sr.

"We have a huge opportunity here," John Doonan, president of the Daytona Beach-based International Motor Sports Association (IMSA) and Garage 56 programme manager, told Reuters on a visit to London for a BlackBook forum.

"The car has a very distinct sound and that’s going to captivate the fans for sure...especially down the Mulsanne Straight."

There is a lot more in play, however, than noise and motorsport milestones.

In February, it successfully held an experimental exhibition race on a quarter-mile track inside Los Angeles' Memorial Coliseum.

Next year it will hold a Cup Series street race in downtown Chicago for the first time.

Doonan said NASCAR president Steve Phelps had said the series, still pre-eminent in North America despite declining attendances and viewing figures in recent years, would try to do some different things and Le Mans was another example.

"NASCAR raced at the LA Coliseum, which was definitely outside of expectations, but what it produced was an opportunity for 70% of that audience to be a first time attendee at a motor car race," he said.

"This opportunity to take the Next Gen car and NASCAR to Le Mans is a further step in that process of putting NASCAR on a global stage.

With Formula One surging in popularity and making inroads into the key U.S. market with three glamorous grands prix in the country next year, NASCAR is competing for eyeballs and relevance.

"Geographically regional is something that we’ve come from, but global is very interesting for the future," he said.

"With the rise of streaming it's quite conceivable that you could run a championship in one region of the world and yet it could be a global championship."

Le Mans is a race where the car is always the star, and that stage also appeals to a U.S. series looking for more big brands beyond Ford, Chevrolet and Toyota.

Drivers have yet to be decided and that can wait until after the formal invitation from Le Mans' organisers, likely next January.

Germany's Mike Rockenfeller, a 2010 Le Mans winner, is making his NASCAR debut in a Spire Motorsports Camaro at Watkins Glen this weekend and has done simulator testing for Garage 56.

Multiple NASCAR Cup champion Jeff Gordon, now 51 and vice-chairman of Hendrick Motorsports, has also been in the simulator.

"Getting the car to the finish is going to be a victory in and of itself," said Doonan.