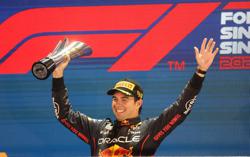 CP150 rider Azroy Hakeem Anuar claimed his first win of the season for Honda Yuzy Idemitsu team in Round 6 of the Petronas Malaysian Cub Prix Championship at Sepang International Circuit.

PETALING JAYA: CP150 rider Azroy Hakeem Anuar claimed his first win of the season in Round 6 of the Petronas Malaysian Cub Prix Championship at the Sepang International Circuit.

The Honda Yuzy Idemitsu rider started from second spot on the grid when he clocked 1:18.223 during the Super Pole session.

In the eighth lap, his position was compromised when he fell back but continued to stay with the leading pack.

At the last lap, Azroy found the opportunity to re-position himself in the top three.

He managed to take the lead before the turn of the last lap to claim the chequered flag in 14:29.364.

“I am grateful to my team who found the right set-up for this race. It was indeed a tough one as I had to find ways to take control of it,” he said.

“At the last lap, I planned to stay at P2 or P3. But my plans failed and I fell behind.

“But something about the wind gave me the opportunity to speed ahead and overtake at least four to five riders.

“At the last turn, I was already in the top three and I pounced on the moment to move ahead,” added Azroy.