BARCELONA, Spain (Reuters) - Aston Martin hit back at Red Bull accusations of copying their car on Saturday, saying they had been working on it long before any key staff joined from their rivals and no data had been leaked.

The under-performing Silverstone-based team rolled out an upgraded car at the Spanish Grand Prix with aerodynamic changes that bore a strong superficial resemblance to the race-winning Red Bull. 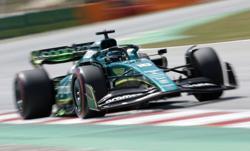