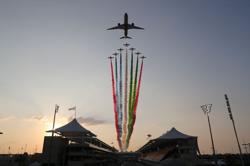 Mexican Perez, a local fan favourite with no home drivers on the grid, lapped the Circuit of the Americas with a time of one minute 34.701 seconds in hot conditions. He had also ended up quickest in Friday practice.

Ferrari's Carlos Sainz was second on the timesheets, in 1:34.805, followed by Red Bull's championship leader Verstappen and McLaren's Lando Norris.

Seven times world champion Hamilton was sixth for Mercedes, with team mate Valtteri Bottas fifth, and 0.518 slower than Perez. Bottas has a five-place grid penalty for an engine change.

Hamilton and Verstappen went top in quick succession on the soft tyres but had the laps deleted for exceeding track limits. Verstappen's time was about a tenth quicker than the Briton's.

Verstappen leads Hamilton by six points in the standings with six races remaining.

Qualifying follows later on Saturday. Mercedes have been on pole position for the last six editions of the race at the Texan track.

Organisers were expecting some 140,000 fans to attend Sunday's race, after 120,000 on Friday and Saturday, in what will be the biggest crowd of the season.

McLaren's Daniel Ricciardo, seventh fastest in the session, was having fun on track already before practice with the Australian doing laps in the late Dale Earnhardt Sr's NASCAR Chevrolet Monte Carlo.

The test in a car owned by team boss Zak Brown was a reward for their one-two victory at the Italian Grand Prix at Monza in September, McLaren's first win since 2012.