He misses racing: Former Moto3 world championship rider Khairul Idham Pawi wants to ‘get back that feeling of being astride a bike after such a long time out.’

Khairul, who is nicknamed Super KIP, will represent the TKKR Racing Team in the 600cc category.

Khairul admitted to missing competitive racing and coming close to making a return several times, hence the decision to be back on the saddle when TKKR Racing offered him the chance to join their team as a rider.

“I miss racing... it’s been my ambition since I was a kid and maybe this is the time for me to make a return to racing,” said the 23-year-old.

However, Khairul has not set any targets and instead plans to focus on getting used to his bike after being out of action for almost a year.

“I dare not brag because the riders these days are an advanced lot, many have shown improvement.

“I just want to enjoy riding again, get back that feeling of being astride a bike after such a long time out,” he said.

Asked about his fitness level, Khairul said he had always stayed active by helping his father to carry and unload bunches of oil palm fruit in his hometown.

He will begin official training with TKKR Racing today.

After competing in the Moto3 world championship for five seasons, Khairul announced his retirement from motorsports after his services were terminated by Petronas Sprinta Racing last October. 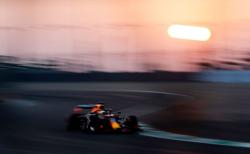