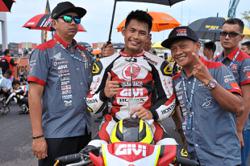 Underbone 150cc champion Mohd Akid Aziz posing with his trophy at the Chang International Circuit in Buriram, Thailand on 3 December.

PETALING JAYA: Yamaha rider Mohd Akid Aziz did not let a crash jolt his composure but bounced back to be the quickest in the qualifying session for Round 5 and 6 of the Petronas Malaysian Cub Prix Championship in Terengganu.

The rider from ONEXOX TKKR Racing Team clocked 49.127, the fastest time of the day after an incident due to his own folly.

“It was my own careless mistake. I was cutting it too fine around the kerb and scraped my footrest,” said Akid, who won Round 4 of the championship at Sepang North Track two weeks ago.

“When I got back on track, the bike did feel rather odd. So I rushed back to the pits where our team worked to get everything going again.

“Luckily, I was able to rejoin the CP150A qualifying and clocked my fastest lap just as the chequered flag came down.”

For the first time since 2010, the premier class of the championship had to be split into two groups – Group A and Group B.

There are 27 riders in the CP150 but only a maximum of 24 are allowed on the grid (due to the width of the Terengganu Motorsports Track).

The actual grid make-up for the top 10 will only be determined today following the SuperPole session, which will feature the top five from groups A and B respectively. 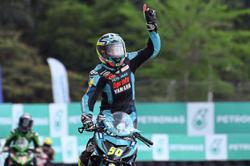