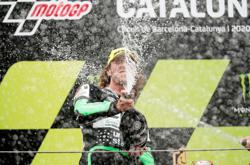 PETALING JAYA: Family ties was what led to the naming of the RNF MotoGP Racing Team’s name.

The Sepang Racing Team (SRT), helmed by Datuk Razlan Razali, will use the new name from next year.

“You spend a lot of time on the road when you work in MotoGP and as a father, I had to make huge sacrifices,” said Razlan.

“So I thought this would be the right time to make a tribute to my children by using the first letters of their names. RNF refer to my children (Razali, Nadia, Farouk).”

The Sepang International Circuit (SIC) decided to relinquish control of the team following Petronas’ decision to conclude their sponsorship at the end of the season.

Razlan and Swede Johan Stigefelt have been given approval from MotoGP rights holder Dorna to take over the ownership to keep the premier class team slot.

Razlan, who is the team principal, said RNF’s title sponsor would be announced next month.

“We will continue as a Yamaha satellite team. We will be rebranded as RNF next year but will retain the same structure and people.

“Yamaha have announced that Italian rider Andrea Dovizioso will ride for us next season but we will decide on the second rider.”

Petronas Sprinta Racing Moto3 rider Darryn Binder, who is from South Africa, is among the front-runners.