PETALING JAYA: The Sepang Racing Team (SRT) are expected to undergo a rebranding exercise and could carry a new name for their MotoGP campaign next year.

This comes after the Sepang International Circuit (SIC) confirmed that they will release SRT to run as an independent entity from next year onwards following Petronas’ decision to end its four-year partnership with the team recently.

“We have agreed for Datuk Razlan to lead the team independently, so they will be on their own now,” Azhan told media in a virtual press conference yesterday.

“There could be a rebranding process taking place and it’s all in the midst of discussion.

“SRT are owned by SIC and operating on the support of Petronas and other sponsors all this while, so there’s plenty for us to look into both legally and financially in order for the separation process to go smoothly.”

Azhan said the separation with SRT would not affect them in anyway.

“The only difference for us is that we won’t have a team in the world championships,” he explained.

“It remains the same for SIC as we are concentrating more on our core business as a venue provider, opening up the circuit to motorsport or non-motorsport events and so forth.”

Azhan, however, stressed that the SIC will continue to develop more grassroot talents through the national-level events they organise as well as continuously providing local riders with a platform to shine via MotoGP feeder series such as the CEV European Championship.

SIC are also currently backing ZK Racing in Europe with Adam Norrodin and Syarifuddin Azman competing in the Moto2 and Moto3 respectively.

Asked if the split with SRT could prompt the SIC to collaborate with foreign teams to get their riders a seat in future world championships, Azhan responded: “At the moment, we just want both Adam and Damok (Syarifuddin) to see off the current CEV season first. We want them to do as well as they can.

“Only after that can we plan for them to move forward. Adam is doing quite well sitting fourth in the overall standings while Syarifuddin isn’t too far from a top 10 spot. We will assess their performance based on the KPI set at the end of the season.”

The formation of SRT since 2014 has opened up the opportunity for some of Malaysia’s finest talents to compete with the world’s best in the MotoGP.

Those who had competed a full season with SRT included Zulfahmi Khairuddin, Adam and Khairul Idham Pawi.

Azhan did not rule out that the SIC will eventually revive the project once more.

“The possibility is there. We have been developing a lot of local talents in the past and we can see that Malaysian riders are among the best in Asia,” he said.

“We need to concentrate on the grassroots. Only through a strong foundation, will we be able to churn out more talents through our mini GPs and groom them right up to the CEV, so that they will be more prepared for the top-flight races.

“It’s obvious that our riders still have plenty of catching up to do with the Europeans.

“If we were to make a comeback in the world championships one day, we have to make sure that our riders return as worthy title challengers.” 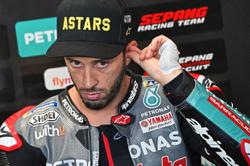