JJ and Co finish third in 4 Hours of Monza race 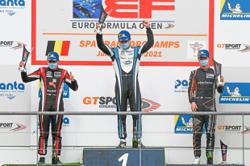 Jazeman Jaafar (left) celebrates with teammate Sean Geleal their hard-fought third placing in 4 Hours of Monza, the Round 4 of European Le Mans Series on Sunday.

PETALING JAYA: Malaysia’s Jazeman Jaafar showed no sign of rustiness when he powered his way to a podium finish in the 4 Hours of Monza in Italy - his first competitive race in two years.

On Sunday, the 28-year-old joined forces with Jota Racing teammate Sean Gelael of Indonesia to complete the 125-lap contest at the famed Monza Circuit in third spot clocking 4’01:31.344.

The 42-team race was dominated by Panis Racing (4’00:56.924) comprising three-man combination of Julien Canal, Will Stevens and James Allen, while United Autosports’ Phillip Hanson, Jonathan Aberdein and Tom Gamble came in second in 4’01:02.055.

The UK-based Jota Racing certainly made their presence felt as they had only joined the European Le Mans Series for the first time this season. The Monza meet was the Round 4 of the series.

They did not take part in the earlier legs – 4 Hours of Barcelona in Spain, 4 Hours of the Red Bull Racing in Austria and 4 Hours of Le Castellet in France.

Two more legs remaining are the 4 Hours of Spa-Francorchamps in Belgium (Sept 19) and 4 Hours of Portimao in Portugal (Oct 24).

Meanwhile, Nazim Azman also brought joy for Malaysia when he secured another two podium finishes in the EuroFormula Open series at Hungaroring Circuit in Hungary. In the three races held, the CryptoTower Racing Team took second place in Race 2, clocking 28:52.083s, 2.646s behind Casper Stevenson of Britain, while Cem Bolukbasi of Turkey finished third in 28:57.947s.

With three races held in each round, Nazim has now secured six podiums – three second-place and three third-place finishes in the four rounds held so far.

“I am really happy with my performances this weekend. I had no prior knowledge of the Hungaroring Circuit, which is very technical in nature, so went into the weekend with no expectations,” said Nazim, who finished sixth in the first race. “Race 3 was particularly challenging with rain hitting the circuit only 10 minutes before the start. My team gave me a fantastic car leading to another podium finish.” 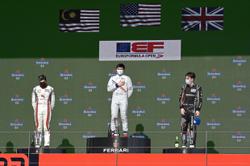 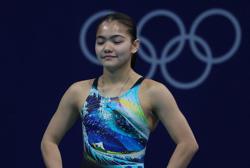