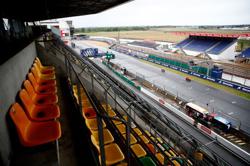 (Reuters) - Valtteri Bottas railed at Mercedes' strategy on Sunday in a radio message accusing the Formula One champions of not listening to him.

The Finn finished a frustrated fourth in a French Grand Prix won by Red Bull's Max Verstappen, whose gamble on stopping twice paid off while Mercedes paid the price for staying out on fading tyres.

"Why...does no one listen to me when I say it's going to be a two-stopper?!," Bottas, whose contract is up at the end of the season, said in a radio outburst featuring several expletives.

Bottas had failed to score in the previous two races in Monaco and Azerbaijan and the failure to defend at least a podium place hurt.

"I think the winning strategy today was two stop. Easy to say afterwards but that's how it is," he said. "I think as a team we're too focused on just completing the one stop, thinking it's the best. But it wasn't.

"I had no front tyres left for the last 10-15 laps so it was really just trying to get the car home. It was not fun today, the last stint.

"If I did a two stop, for sure I would have been on the podium and fighting for the win."

Red Bull's Sergio Perez, on fresher tyres after a later stop than Bottas, took third in the closing laps.

Bottas had plenty of margin towards the end to pit without losing position, and have a shot at taking fastest lap from Verstappen, but Mercedes kept him out so he also missed out on that bonus point.

Team boss Toto Wolff said that was because it looked like Perez might collect a penalty for overtaking outside of the track limits and they wanted Bottas to remain within five seconds of the Mexican.

In the end, stewards decided not to punish Perez.

"We gambled, we lost," said Wolff.