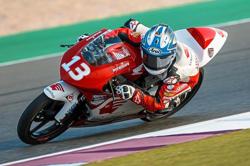 PETALING JAYA: Teenager Hakim Danish Ramli showed he has the potential to be the next top motorcycle racer for Malaysia after sweeping two podiums from his first two races in the Asia Talent Cup in Doha.

Hakim, who will only turn 14 in July displayed good race craft to take third place in both Race 1 and 2 within the space of 24 hours at the Losail International Circuit. Hakim is competing in his rookie season in the feeder series for the MotoGP world championship and is one of the three riders for ZK Racing, which is managed by former Moto3 podium rider Zulfahmi Khairuddin.

Furusato earned his double after crossing the line first in 31:24.947.

Hakim is from Terengganu and earned his ride in the Asia Talent Cup after winning the 160cc category in the inaugural SIC MiniGP Championship last year.

“I was in a big group of seven to eight riders chasing in front. I tried my best to fight for second place but was overtaken towards the end of the finishing line.

“I am happy to finish both races on the podium and make my parents, who have been supporting me all this while, proud, ” said Hakim, who will remain in Doha for the second round of the championship taking place this weekend. 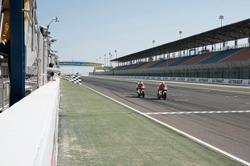