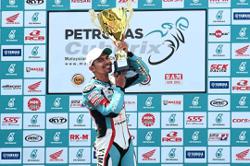 Finally a champion: Muzakkir Mohamed (centre) celebrates his maiden CP150 victory on the podium flanked by Izzat Zaidi (left) and Ahmad Afif Amran who finished second and third respectively in yesterday’s opening round of the Malaysian Cub Prix Championship.

PETALING JAYA: Perseverance does pay off.

It was a dream come true for veteran rider Muzakkir Mohamed after being crowned the CP150 champion yesterday for the first time, a decade after he started competing in the Petronas Malaysian Cub Prix Championship.

The 29-year-old, riding for ONEXOX TKKR Racing Team, upstaged his more illustrious rivals to clinch the season-opening round at the Sepang South Circuit.

Muzakkir was on cloud nine after his hard-fought triumph.

“In the weeks leading to the first round, several big names, one after another, confirmed their entries for the race. Just look at the CP150 grid, out of the 27 riders, 14 were previous title holders, ” said Muzakkir.

“So, that’s why, this is such a meaningful win for me. I’ve been waiting for this moment for 10 years.”

With 25 points in the bag to lead the riders’ standings, Muzakkir dares to dream bigger – to try become the overall champion.

“I’m looking ahead to sustain the advantage (over the remaining nine rounds of the season) in pursuit of a bigger dream, to see my name carved in the champion trophy, ” he vowed.Meanwhile, CP125 defending champion Mohd Syafiq Rosli of Petronas Sprinta Yamaha Maju Motor proved he was in a class of his own as he cruised to the finish line in 11:10.393s.

In the WIRA KBS category, the Yamaha 31 Racing team got off to a best possible start when Syamil Amsyar Iffende led his team mates to a clean sweep of all podium finishes. 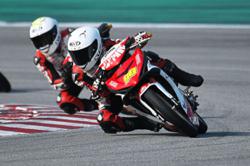