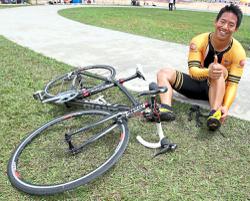 PETALING JAYA: Five ZK Racing riders had to make do without the Covid-19 vaccinations as they left last night to compete in the Asia Talent Cup and CEV Europe Championship.

Adam Norrodin and Syarifuddin Azman will head to Barcelona for the Championship which starts next month while Mohd Sharul Ezwan, Hakim Danish Ramli and Danial Syahmi Shahril will kick off their first round campaign in Doha this weekend.

Sepang International Circuit (SIC) chief executive officer Azhan Shafriman Hanif said they had to drop the initial plan to get the boys vaccinated as there was just not enough time.

“They had to follow up with the second dose of the vaccine 19 days after getting the first.

“And after looking at their Asia Talent Cup and CEV Europe Championship schedule, it was not possible to follow through with our plan, ” said Azhan, who thanked the relevant authorities for letting them leave the country.

“Anyway, they are familiar with the SOPs as they went through the same situation last year.”

The Asia Talent Cup is also the support event for the season-opening MotoGP world championship which starts at the Losail International Circuit in Doha end of this month.

“The team prepared well physically and mentally. Josiah (Ng) has helped bring up the discipline level of the boys, showing them the way to achieve their personal goals.”

SIC roped in the former national cyclist as a performance coach.