Think pink: Nur Atika Azwar (centre, back) is the first, and the youngest, woman in Malaysia to own a racing team, known as Tuneboss-Pink Racing Team.

SHAH ALAM: A deep passion for two-wheel motorsports has spurred Nur Atika Azwar to form her own team to compete in the local races.

By launching the Tuneboss-Pink Racing Team, the 25-year-old Atika is now the first, and the youngest, woman in Malaysia to own a racing team and will compete in Cub Prix championship, the Malaysia Superbike Championship and Drag Racing.

Beginning as a motovlogger in 2019, she began by uploading videos about travels, motorcycle repairs and women’s perspectives as well as Cub Prix race reviews before receiving an offer to promote the championship’s sideshows in the same year.

She then took on the challenge of being a racer in the 2020 Pro-Am support race and became known as the ‘pink rider’.

Her love for the sport, usually dominated by men, further deepened and Atika then decided to set up her own team at the end of last year in a bid to provide more opportunities for women to be racers and crew members.

“I founded this team to attract more women to join the Malaysian motor racing industry because there are many women out there who dream of racing. Some also want to be mechanics but they have no platform to kick-start their journey, ” said Atika.

“So, I hope that one day we can expand the team with more women. We, however, do not want to be an all-female team, there is strong support from men in the team too.”

Nur Atika, who said that her team would race in the pink-coloured Yamaha Legend machine, is not setting a lofty target in their debut season as she wants to gain experience and increase the knowledge about the bikes.

At the launch, she also introduced her three Tuneboss-Pink Racing Team riders for the Cub Prix, comprising two women, Alia Saarizan in the Hero category and Fifi Muhammad in the CP125 class, assisted by Harith Baharin.

Fifi, who has an extensive experience having competed in various Malaysia Super Series and Cub Prix races, is aiming to win as many points as possible.

“This is my first year in the CP125, so I’m not aiming that high but I hope to collect points in every round, ” she said. — Bernama 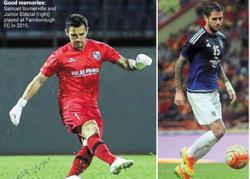