Bottas hopes to fight for F1 title with a 'happy head'

LONDON (Reuters) - Valtteri Bottas believes he can challenge Mercedes team mate Lewis Hamilton for the Formula One title with a 'happy head' in what could be his last chance in equal equipment.

Trying to beat the seven times world champion, the sport's most successful driver of all time, has been a thankless task but the Finn -- out of contract at the end of the year -- said on Tuesday he could still succeed.

"Over the years you learn always more about what works and what doesn't," he told reporters at the launch of the team's 2021 car. "I shall use everything I can and all the support I can get."

The 31-year-old, who won two races last year to Hamilton's 11, said he had switched off and had a "good reset" over the winter.

"Many times when you step out of the sport for a couple of weeks you start assessing things and realise things when you see the big picture," he added.

Bottas said consistency was key and much of that came down to the mental side, being really focused and not putting too much pressure on himself.

"It's all about finding that balance and playing with that... I need to be self-honest with everything and try to find a good way, a kind of happy head for every grand prix," he said.

"Lewis has won the titles all the years now that I've been with the team but still going into this new year, starting fresh and with a new page -- absolutely, I believe that I can fight for the title."

The Finn was reluctant to detail what he was doing on the mental front, saying he preferred to keep it private and not share techniques.

"It's something I have paid more focus on over the winter and will pay more focus on during the season. And if I need help I will use some professional help. If not, then I use the mirror." 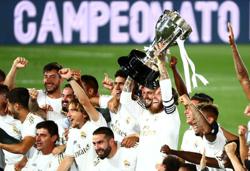