(Reuters) - Charles Leclerc has responded to Ferrari's decision to challenge for outright victory in the Le Mans 24 Hours from 2023 by saying he would jump at the chance to compete in the endurance classic.

The Monegasque Formula One driver told reporters he had always been a fan of the annual sportscar race in eastern France.

"I love Le Mans. If the opportunity arises then I would be very happy to join," said the 23-year-old.

"At the moment my main focus is Formula One but if there is an opportunity, why not?"

Ferrari said on Wednesday it would be entering the new Hypercar top category at Le Mans in 2023, competing for outright victory for the first time in 50 years.

Numerous Formula One drivers have won Le Mans, with Germany's Nico Hulkenberg triumphant with Porsche in 2015 while also competing in F1 with Force India.

Formula One has introduced a budget cap this year but Ferrari boss Mattia Binotto denied the Le Mans move was part of a plan to redeploy staff to other areas of motorsport.

"It's not a consequence of the financial regulations at all," he said.

"I think the programme has been evaluated from the company point of view, of interest, and we decided as Ferrari to be involved."

Binotto said the Ferrari F1 operation could provide know-how and expertise but he would not be in charge of the Le Mans programme. 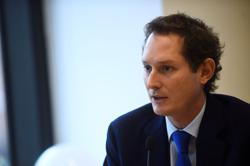