Fabio is one rider who starts his own bike Strange as it may seem, the Frenchman is the only MotoGP rider who starts his own bike when on the grid.

Quartararo will race for the Yamaha factory team alongside Spaniard Maverick Vinales for the new season starting in March.

“I want to be part of the team. We treat each other as humans and everyone makes an impact in the team.

“I am not just a rider, move the bike and go in to race.

“For me, I will not say I want to race everytime but we want to race because for me, everyone is working harder than myself behind the scenes, ” as he explained on the official website motoGP.com.

Quartararo endured a tough end to the 2020 MotoGP season.

The incoming factory Yamaha rider won three times for the Malaysian team in 2020 but his title challenge crumbled after a tough run of races from the French Grand Prix through to a disappointing finale afflicted by arm-pump problem in Portugal, in which he failed to reach the top six.

Having led for much of the campaign, the 21-year-old ended the year eighth in the standings and 44 points behind world champion Joan Mir of Spain. 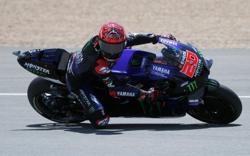